Hi, Just here to tell you today about a page on Facebook called "Rabbit Craft Community" where you can check out the crafts of other rabbit lovers where there is stuff for bunnies such as rabbit toys, treats, etc.  Or you can find rabbit themed items such as jewelry, clothing, art, soap, and a variety of other things created by artists and crafters. 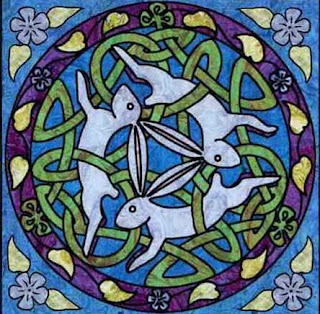 This is a great way to support fellow bunny lovers, local artisans and help stimulate the economy in a direct to the artist way.  Also, you will find unique gifts for yourself, family, friends and especially the bunnies that you won't find in a box store or chain store!

You can also usually communicate directly with the maker of the merchandise in most cases, which is something you can't do in a big chain or box store. You can ask questions, often ask for custom work or make suggestions.

We also want crafters and artists of rabbit related things to join us. Please just "like" the page, share away and we will repost!  It's also a great way to share events, contests, etc. you might be holding or be at.

We are interested in rescues or other non-profit rabbit organizations sharing their events,  craft auctions, stores, contests, etc.  We will repost and tweet as well!

Please stop by, "like" us, look around and share away as well! You can find Rabbit Craft Community by clicking right here!
Posted by All Ears at 12:30 PM No comments:

Just wanted to share about a closed (for your privacy) group we started on Facebook that's called Help for Head Tilt Hoppers. It's been having a lot of interaction with lots of different people who've either had bunnies with head tilt or those going through it seeking answers or sharing what's going on. They are also sharing what helps with all different aspects, as well as success stories. It's been a very positive group.

With my first head tilt bun, Ashes, I felt so helpless and scared. It was with lots of my own research, trial and error and a great second opinion from another vet that he recovered with some minor residual issues, but was a happy bunny.  The other thing that was a major help was help from others in forums such as Etherbun, which has existed before the days of Facebook. People were great.  Head tilt isn't something most people would know about, such as a next door neighbor, who otherwise could perhaps give advice on a pet dog or cat. Rabbits are gaining popularity, but still are surprising people as being a house pet when they find out.

If you have or are dealing with head tilt in a rabbit, please join us. You can find us by clicking on the groups name here: Help for Headtilt Hoppers . Please share us with others. It's free. All you need to be is a member of Facebook.


Please "like" Rabbit Slippers Blog on Face Book to keep up with the latest postings & events.

You can also sign up by e-mail notices at the top right of the page. (Your privacy is important to Rabbit Slippers).

You can also follow through Google Friend Connect or Networked Blogs, both located in the right side bar.

Just wanted to share the excitement of how we are starting a chapter of Bunnies in Baskets, which is an organization that certifies and educates Therapy Bunnies. They are based in Portland, Oregon. Here I am sharing some background in an interview I did with their founder and organizer, Sarah Baran. I even interviewed one of their graduates, a therapy rabbit named Reggie Pani, whose interview is right here.

You will be seeing posts as we go through our organizing and set up. Bunnies in Baskets is a great organization, which caters to the needs of rabbits as visiting therapy animals getting certified and training/educating their owners as well.

I have done lots of visiting over the years, without any formal certification, because I owned bunnies and became totally enamored of them when one "seduced" my heart into his as a pet in a nursing home I worked at.  He followed me everywhere.

I then brought home a bunny, that was donated to the nursing home. From that day, I was hooked.  That bunny and others I owned (or they owned me) did lots of visits in lots of ways, sharing their magical love,  in lots of places which give me lots of stories to tell.

Some places want  "certified therapy animals" and are also hesitant to take rabbits in because they don't know anything about them and that makes them a bit nervous. With that in mind, we want to share the bunny magic with certification from people that know rabbits and can educate well. Some of this can go way beyond the visiting therapeutically, but can help educate people on how wonderful these companion animals are.

So, please stay tuned as the Connecticut Chapter of Bunnies in Baskets gets off the ground and you can see how we develop. Hopefully, by chronicling this, we can help provide others in other places with some information that might be helpful in starting their own chapter!

Thanks for stopping by!

The Bunnies of Christmas

Going to do Rabbit Visits in Nursing Home on Friday

Our Bunny Visit to the Nursing Home is Tomorrow Morning

Today's Bunny Visit to the Nursing Home & Some Lessons

Rabbit Slippers has a new e-mail address rabbitslippersblog@gmail.com if you want to e-mail any ideas, suggestions, comments, concerns or share anything.


Please "like" Rabbit Slippers Blog on Face Book to keep up with the latest postings & events.

You can also sign up by e-mail notices at the top right of the page. (Your privacy is important to Rabbit Slippers).

You can also follow through Google Friend Connect or Networked Blogs, both located in the right side bar.

It's been a while since I posted. I was devastated at the loss of poor Georgie and Fluffy bunnies, who are the bunnies I last wrote about in here, with great hopes of their recovery. They passed within a week of a each other and I couldn't stop crying when I thought of them or saw their photos.

I'm sorry that I didn't share it. I just didn't have the strength at the time. I still look at them in their photos this few months later and feel sad. Occasionally I'm looking for them or slip and call out one of their names and then catch myself.

This is going to be a short post, but I wanted to get this out there before I wrote any new posts.  Thanks for everyone's support in trying to help them get better and in helping my own heart. I send you each a loving hug of appreciation.
Posted by All Ears at 9:43 AM 2 comments:

For anyone who makes a purchase of $10.00 or more at Bunny Burrow Boutique during this weekend Friday, April 12th, 2013 to the end of day on Sunday, April 14th, 2012, you will receive a free pair of rabbit earrings sent with your purchase.  This sale is going on to help two bunnies with e. cuniculi with their medical bills.  Click here for more information on the bunnies. Not mentioned in the linked article is that both boys have also served as therapy bunnies at a local nursing home.


The earring choices are below. If you do make a choice, then please express your choice in a note while ordering or the choice will be made by Bunny Burrow Boutique or as long as supplies last.

Georgie and Fluffy: An Update on E.Cunniculi

First of all, I'd like to truly express appreciation to those who helped Fluffy out with his medical bills.  It has helped make a difference in his being alive! 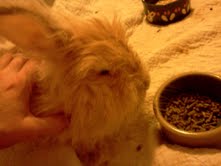 Since the time of my last post (click here), Fluffy has been going through ups and downs, but has been slowly improving.  A short time after the last post, my other rabbit Georgie had started to demonstrate symptoms different, but similar to those of Fluffy.

Georgie is about six years old, but had been healthy up until this time except for a front paw which was either injured and didn't heal correctly or has some type of bone condition which caused a lower bone to not connect correctly with the rest of his bones/joints. He seems to get a long fine and the vet was not concerned with it after taking xrays. He, now though, has been since diagnosed with e.cuniculi along with Fluffy.  Fluffy was diagnosed with having kidney issues at first, but the e.c. diagnosis came with follow-up.


Georgie has demonstrated more issues with stargazing, head sway and an unsteady gait. Fluffy has been dealing with balance issues, kidney issues and some paralysis, as well as wasting away.


The boys have been receiving treatment with fenbendazole and ivermectin. There has been some very slow improvement, but it's taking time. They both have been needing butt baths, extra care and attention. They also have been lots of loving attention to encourage having a will to live, to keep them active and interested in life and eating.  They are generally seem to respond well when they get lots of attention.

Sadly, but fortunately (in a way of gaining experience to help these pals), I've had experience in dealing with e.cuniculi along time ago. I wouldn't wish it on anyone or any anipal whatsoever. I lost one rabbit to e.cunniculi because the vet at the time wouldn't treat that rabbit until the test came back. The rabbit died because treatment was started way too late. I learned a lot from the loss of my poor Thumper, who suffered so much. I was devastated. I swore this would never happen to any of my bunnies again. I have better vets and am much more aggressive about getting treatment.

The more recent photos of Fluffy and Georgie show them sick. I took pictures with a camera phone so as not to disturb them with noises my camera makes or to startle them with a flash.  Fluffy and Georgie both now (since after the photos were taken) have fleece blankies they lie on or spend most of their time on for their comfort and to help with urine scald.  There have times that especially Fluffy scared me with where he looked near death, but with the answering of many prayers, he keeps on fighting. I will share more photos as they improve.

It's hard to tell how thin Fluffy is because of his Angora fur. One thing people should always do is feel their bunny's body to see if they are bony, losing weight, and for any abnormalities in general on a regular basis. Even for short hair rabbits, one can't always tell by looking if there are changes!

The 20% sale for helping with Fluffy's and Georgie's medical bills is going on at Bunny Burrow Boutique.. By using the code: BUNNY20 at checkout, 20% will be taken off your entire order.

Bunny Burrow Boutique is having a sale for 20% off your entire order with free shipping to help out Fluffy and his medical bills.  To get your 20% off you must use the coupon code: BUNNY20 at checkout on a minimum $8.00 purchase ($8.00 before discount). The shipping is free. There are some new bunny items and other new items. This is also just in time for Easter You can click on this link to check out: Bunny Burrow Boutique.

Fluffy is an Angora rabbit who is seven years old. He is dealing with a kidney problem and needs help to pay for his vet bills. Any purchase you make will help out with his vet bills. I am not asking for, nor will I accept donations. I am just trying to generate some extra money to pay down his bills.

Reason to Be Owned By a Bunny